Hi all, I've got a gross encroachment by my client (Hayes) on to the lands of Jacobs. I am reaching out to try to find a solution that is equitable.
Some facts and history:

The monuments shown by solid black circles were from a 1980's BLM survey, they agree with and hold a 1955 survey of the section of which the subject parcels are aliquot parts, or at least their point of beginnings and general location are based on in their respective legal descriptions.

The occupation lines do not seem to be based on a survey but rather one was built and the others built on the assumption that the first was correct.

I can see that on aerial photograph from 1955 there were no structures or occupations present before the 1955 survey. I believe the first occupations occurred around the 1960's or 1970's.

I will explain any further matters of history or survey, title, etc. as questions come along (hopefully)

My first idea was to quitclaim that portion of the Hayes' which is encroaching onto Jacobs from Jacobs to Hayes. A real estate lawyer involved felt that that may be a violation of the subdivision map act and result in unmarketable and uninsurable title though and has informed Hayes to pursue litigation against Jacobs to quit title by claim of adverse possession for which the statutes have almost certainly been met. The way the lawyer sees it, the parties have been paying taxes on the deed parcels and the improvements. So he would like me to write a legal description for the portion encroaching and have the court adjudicate it to the Hayes' and become an addition to their existing parcel. I've got issues with this method as I am almost certain it will lead to further litigation by the contiguous parties.

please share your thoughts and knowledge that you can at this point and I will try my best to answer questions and further the conversation.

Enjoy!
You do not have the required permissions to view the files attached to this post.
Top 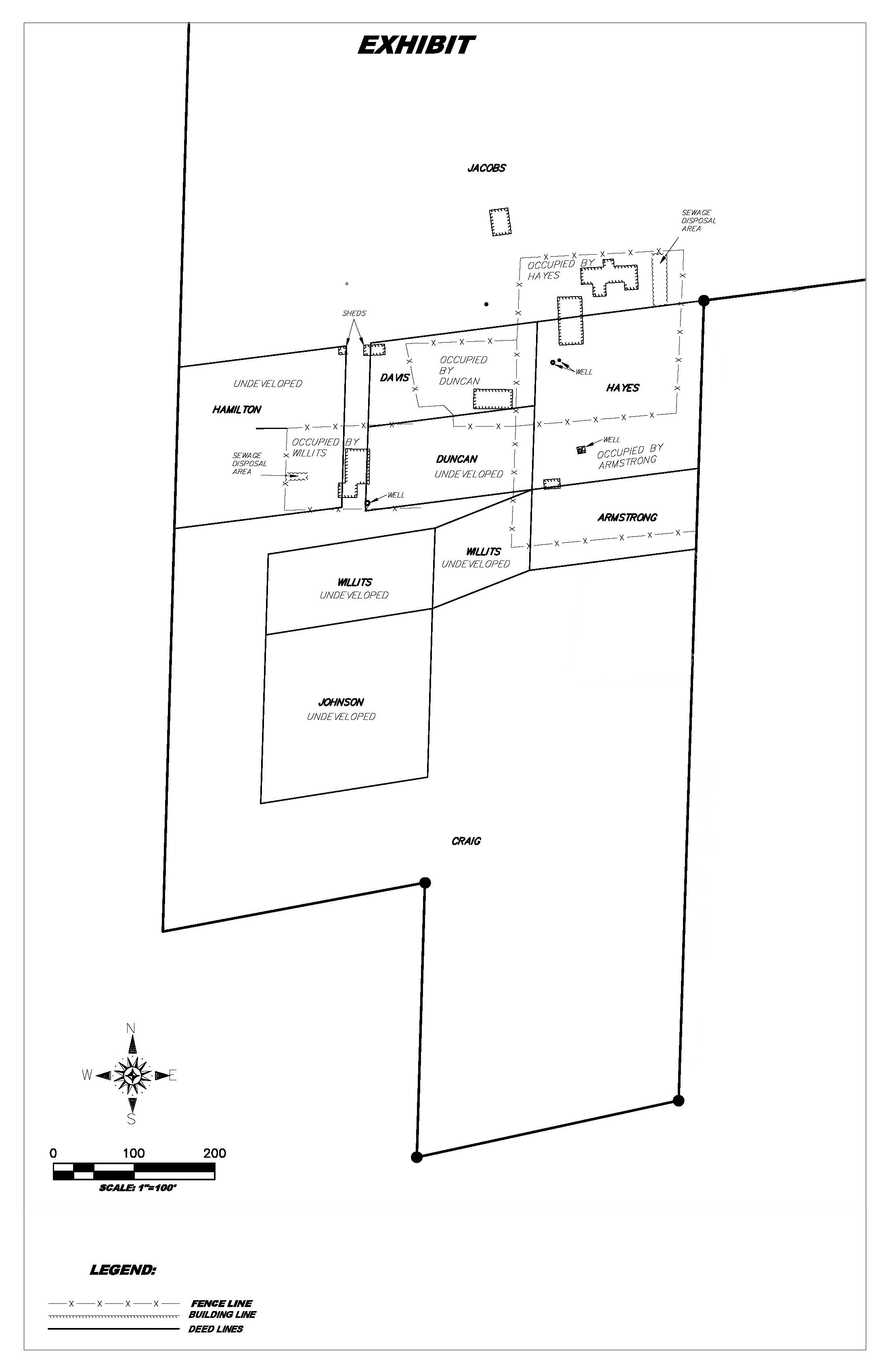 How large are the parcels? Would the quit claim create parcels that violate local ordinance?

If Yes, you may need to go through an SMA process.

If no, a Lot Line Adjustment is the prefect tool to clear up problems such as this.
Ian Wilson, P.L.S. (CA / NV / CO)
Alameda County Surveyor
Top

The parcels are one acre and one half acre respectively. Zoning is 2.5 Acre minimum so none of these are legal conforming parcels. But they are non conforming legal parcels due to the long term occupation.

A lot line adjustment, in my opinion, is to obtain the counties approval as to a legal conforming and buildable parcel. I don't think we want to involve the county or alert them to the other problems with the parcels here such as well and septic separation, well casing depths and zoning and setback conformity. Also the county here is extremely short staffed and typically completes a LLA in one to two years, which is longer than my clients would like to wait. My thinking was that by quit claiming and and re-interpretation of the deeds to match them with the occupation that the quit claim would be like a LLA but not sanctioned by the county and not therefor create a new parcel?

I think a reasonable fence line surveyor would come up with a resolution that is like the above exhibit.

What about re-writing the deeds? as well as a series of quitclaims? is that a thing we can do? if so would a title company insure marketable title?
Top

You have a mess. If you start moving lines around, you're re-subdividing and you need to perform a map action...unless...

What county are you in? Humboldt has a boundary correction ordinance which reads like this:

This is a useful tool for these types of situations. I expect that you will want to have Jacobs and Craig on board

Beyond that you are likely facing some Planning agency or civil court gymnastics. Don't wait up.....
You do not have the required permissions to view the files attached to this post.
Top

Rather than "moving the lines around" couldn't one assume that the POB of the legal descriptions was in error due to the lack of a survey and therefore be adjusted to roughly fit what is found in the field?

The deeds are written by assuming a perfect section was in place before any survey other than the original GLO survey, which shows a nearly perfect section.

I will check with my county surveyor to see if we have an ordinance like the one you posted, that would be so useful around here!

Thanks so much for the input all, really appreciate you taking the time to help me.
Top

Attorneys almost always go for the most adversarial approach first which more often than not turns friendly or civil neighbors into lifelong bitter enemies.

If you had 4 or fewer parcels involved, you were on the right track with QCDs, but via the LLA process. That does not create new parcels.

Ian is very good at coming up with viable solutions most would not think of. I suggest having a conversation or meeting with him to come up with one or more possible solutions which would cause the least consternation and conflict between the landowners.

The trick that jumps out at me is finding a solution where Jacobs won't feel like the biggest and only loser in the deal.
Evan Page, PLS
A Certain Forum Essayist
Top

Did you consider getting a certificate of compliance issued for the existing parcels, so as to ratify the area of the lots and then process a lot line adjustment and new COC.

Issuance of a COC and LLA is ministerial. If you went to a LLA first, you could confuse the planners.

After you are done, prepare a ROS reflecting the approved COC. Before you do that, engage a title company to make sure they will insure the final project. LOOK OUT for septic field issues.

If permits have been issued, you are entitled to the COC. Obtaining the COC is perhaps the first and most important step to take. If you go to the LLA first, they may challenge you on lot size. If you walk in with an already issued COC, that concern should be moot.
Top

I would post an example but it is prohibited.
Top

Got ya, thanks Mike. I may be able to obtain a CoC rather easily. I will consult with my county surveyor before approaching planning about a LLA.
Top

First questions is a chain of title question. It would appear that all the little lots were subdivided out of "Craig" by deed. Assuming thats the case, how was the line between the south aliquot part and north aliquot part ( Jacobs) created? Was it original GLO grant line? Deed split with aliquot descriptions?

Second Question- do all of the little lots have a similiar scrivenor? IE do they all appear to be created by the same individual in a relativley similiar time frame?

I ask those questions because in Sonoma County we have many non-square sections (we even have a triangle section!!) and there are many deeds in the backwoods that are just like this situation. Its often some family that deeded off lots for kids or money over a 5-10 year perior and you can tell they are meant to be in harmony. Generally speaking if we determine that there was a common understanding of the PoB of the deeds, then we hold that postion for all lines that were able to be controlled by it and then have excess and deficiency at senior lines. The calls for "east" "north" etc in the deeds are generally interpreted to follow sections lines, and the reverse is sometimes true when we determine that calls to along the section line are really meant to be east/north etc. Making that determination is tough though as you are going against "standard procedure" and should have a pile of evidence ready to present to prove your both right, and correct.

This lets all of the fences mostly match, and a LLA needs to be done between Hayes and Jacobs. The only real loser/argument agsinst that solution is Davis because depending on senior rights and how the details of the deeds are written, Davis may not have much land, IE that small triangle is all thats left.

As I see it, asserting the location of boundary lines based the entirety of the situation is the only discretionary action you have in this case. If you are the entryman for this part of the section you have a small blank spot on the map ( pun intended :) to act as you see fit. At the end of the day, as surveyors we can't move fixed lines.

In regards to actually fixing this situation, buckle up, your in for a interesting ride! In the past we have done stuff similiar to what Mike P said, and use the paperwork agsinst itself, IE keep moving tangentially and often do an end run on some of the paperwork hurdles.

P.S. If you have a good relationship with the CS and the County permit folks, I would have a frank conversation to see if you can get some sort of exceptions from on high and do LLAs directly, but that requires all involved being rational and reasonable...
Top

It's as though the occupation appears to be the monuments for the survey! If that was so - the neighborhood would be more "harmonious". Much to ponder. I don't relish your position.

Carry on and pray it pours tomorrow!

Users browsing this forum: No registered users and 7 guests